Meet the GQ Men of the Year 2022 honourees: Deepika Padukone, Ranveer Singh, and Allu Arjun among others

What’s your Reaction?
+1
0
+1
0
+1
0
+1
0
+1
0
Facebook Twitter Email
Actor of the Year – Ranveer Singh: India’s victory at the 1983 Cricket Ranveer Singh’s transformation into Kapil Dev was immersive and absolute. The result: breath-taking. In the retelling of this powerful story through the vantage point of a charismatic, fearless leader, Ranveer Singh took fans back to the point where all the magic began. Singh has a knack for surprising people with style, and he’s doing it again on the GQ cover. Ranveer can be seen wearing a flowery jacket over a matching floral shirt. His matching flowered shorts and tights, both from Louis Vuitton, completed his look. Global Fashion Personality – Deepika Padukone: The South Asian community—whether at home or spread out as the diaspora overseas—accounts for nearly 25 percent of the planet. With 100 million followers across social media platforms and a career that has placed her at the zenith of the Hindi film industry, Deepika Padukone serves not only as a face of a nation but also as a conduit to this vast audience for some of the world’s leading brands. In May, Padukone was announced as Louis Vuitton’s “House Ambassador”, and in October another iconic French maison, Cartier, announced her as its newest face. This is just another step for Padukone, who has been rapidly growing in global recognition and appeal. Deepika Padukone is fashionable and has positive self. She recently graced the cover of GQ and looks absolutely stunning and brave. She is the definition of beauty, and we can’t stop staring at her picture. She is seen on the cover sporting a white crop top underneath an enormous black jacket. She wore blue flared pants with her jacket. She looked lovely with minimal makeup and her hair in two braids.

Leading Man – Allu Arjun: Arjun’s blockbuster Pushpa: The Rise resuscitated the Indian film industry after its driest, pandemic-induced spell. As a member of one of Telugu cinema’s most powerful clans, Arjun has a host of accolades peppering his 20 years in the industry. Yet it was his powerhouse performance as Pushpa Raj, a roguish character he perfected over the course of two years, that has placed him at the centre of global film culture—whose destiny is increasingly being controlled by streaming platforms. With his dramatic performances and breakthrough dance moves, the actor is now successfully transcending borders—with the whole world watching. Allu Arjun can be seen on the cover wearing a turtleneck in the monochromatic image that appeared on the GQ cover. His slight wavy hair is seen with a thick beard and moustache on him. 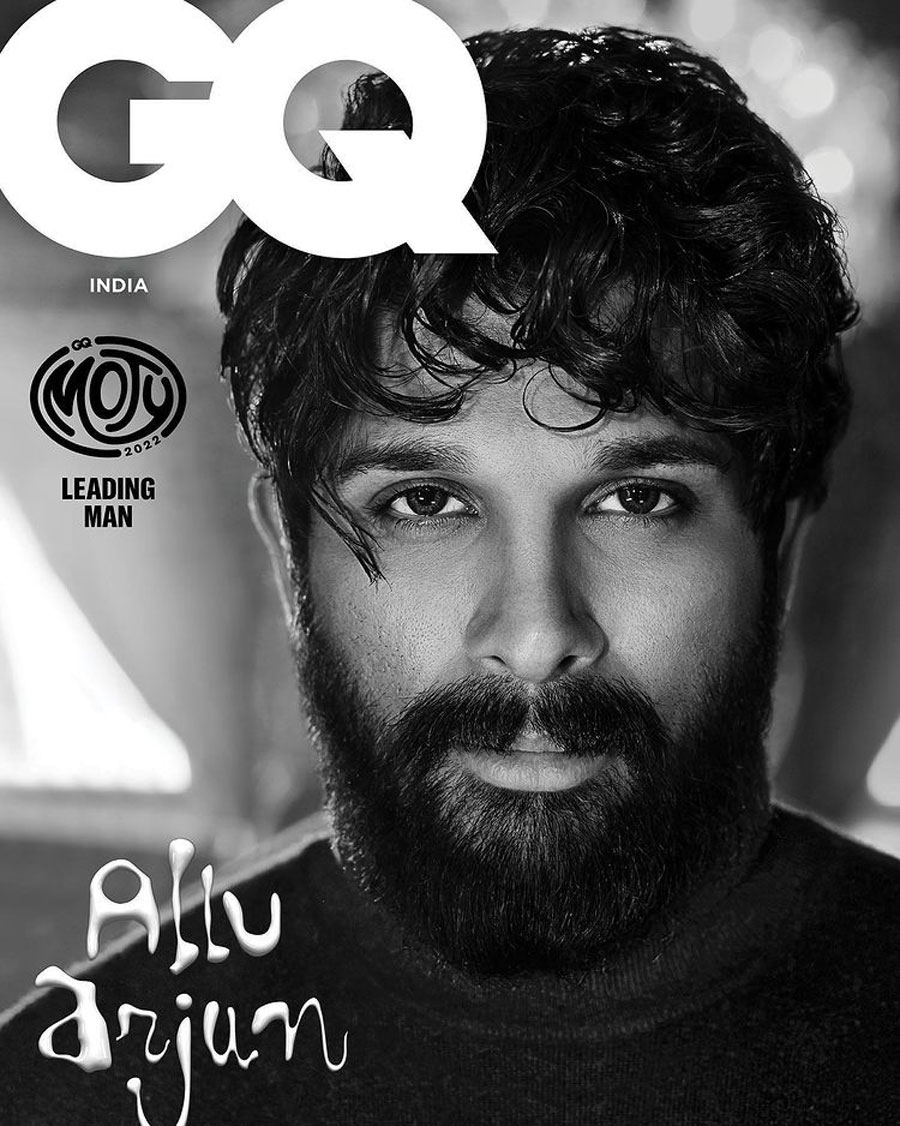 Entertainer of the Year – Kartik Aaryan: Aaryan achieved what many others could not this year: get audiences back into cinemas post-pandemic. At a time when Hindi cinema’s biggest stars were unable to lure audiences, Aaryan’s signature goofy turn in the comedy-horror film Bhool Bhulaiyaa 2 resulted in box office gold, providing a much-needed boost to the industry. The film also proved that Aaryan’s success is not dependent on big banners or formulaic plots or even co-stars, making him one of those few “outsiders” who could make their mark in this competitive field. Forthcoming projects like Rohit Dhawan’s Shehzada, Hansal Mehta’s Captain India, and Shashanka Ghosh’s latest film Freddy, will further catalyse the rise of this unconventional star whose claim to fame is that he does not fit in any mould. On the cover, Kartik Aaryan is shown wearing a red jacket over a red shirt from Hermes. He looked effortlessly trendy thanks to the red, and we adore how his combed-back hair and goatee finished the look. Creative Force-Bhumi Pednekar: Bhumi Pednekar has made a career out of unusual movie choices, and her role in this year’s powerful Badhaai Do has arguably been her best. Her actions off-screen are just as compelling: Her Climate Warrior initiative raises awareness about climate change and sustainable living. Pednekar is a powerhouse actor with rare talent and the intelligence to know how to make an impact—both on and off the screen. Bhumi Pednekar has always attracted attention for her elegant sense of style. The actress’s skill and poised performances have won over millions of hearts. The diva is now displaying her contagious charisma in the GQ cover shoot. Bhumi looks really stunning on the cover of one of the best fashion magazines. She can be seen wearing a black and gold bralette, which she concealed with an enormous black leather jacket from the house of CB and teamed with matching black leather flared pants. Progressive Powerhouse: Rajkummar Rao: This year, Rajkummar Rao packed a punch with Badhaai Do as a gay policeman in a lavender marriage. His ability to seamlessly transition between drama and comedy makes Rao a versatile actor whose need to be recognized commercially does not compromise his commitment to craft. Rao’s fashion choices have also evolved over the years, becoming more daring, vibrant, and captivating, and everyone should be paying attention to how the actor pulls it all off. Rajkummar appears on the GQ cover sporting a Dior grey pullover, white shoes, and denim trousers, looking dapper as ever.